If you have already reset the laptop’s power plan settings, and have set a AUTO fan speed within MSI Dragon Center, probably nothing else needs be done.

Windows Task Manager shows CPU to be 100% used, most of the load is by a Windows process. The issue occurs on an MSI laptop, which has MSI own management software, such as System Control Manager (SCM) and/or MSI Dragon Center.

MSI’s own applications interact with MS Windows power plans to set up the operating parameters of the system: Fan(s) speed counted in rpm, settings for battery life vs performance, timeouts. WIN10 will also switch power plans when the laptop is getting plugged/unplagged from its charger, which also alters the behavior of the fans. MSI Dragon Center and Windows power management are very tightly knit. Also there seems to be a connection between the power plan and CPU consumption. The more performance oriented is the power plan, the higher the CPU consumption will be. The main finding is that the CPU 100% does not relate to any specific process, but the power plan in effect.

Step 1, this is how Task Manager looks now: 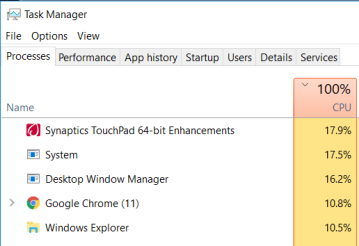 …and this is how SCM looks, with Dragon Center installed:

…and this is how SCM looks now: Notice how the section with the different “modes” appeared. Now let’s select any mode other than “ECO off”, and get a screenshot of MS Task Manager 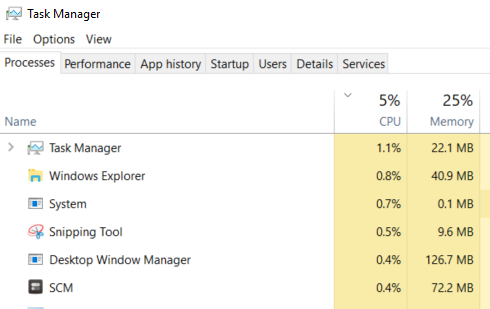 …quite a difference. There is an immediate, notable difference with the fans speed, the laptop becomes immediately quiet. What else has happened?

Right-click on the Windows logo on Your screen, select “Power Options” and at the following screen “Additional power settings”. There, is a new power plan, created by SCM, and named after the selected “mode”, for example mine is called “Gaming”. I tried to compare the detailed configuration of this plan (“Change plan settings”) with the one that is causing the CPU to peak, and i was unable to find the exact parameter that creates the whole issue. In fact, the new power plan is quite “aggressive” in some of its settings (acccessed by “Change plan settings” under Control Panel > Hardware and Sound > Power Options > Edit Plan Settings ) 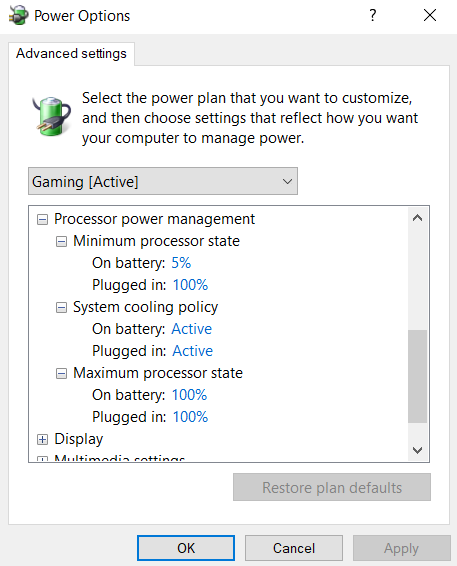 With MSI Dragon Center installed again, there is no way to create further SCM power plans. Using the Windows default ones will revert to 100% CPU, but look:

If anybody knows, and feels confident of their Hardware/Windows skills, please leave a comment. For myself, i have decided to leave a less restricted plan for the fans, accepting to see the CPU 100% message, which i somehow thing is not crucial. This, because i am worried that trying to demote the cooling system might affect the well-being of the motherboard of my Leopard. I suppose, the choice is yours.

This site uses Akismet to reduce spam. Learn how your comment data is processed.